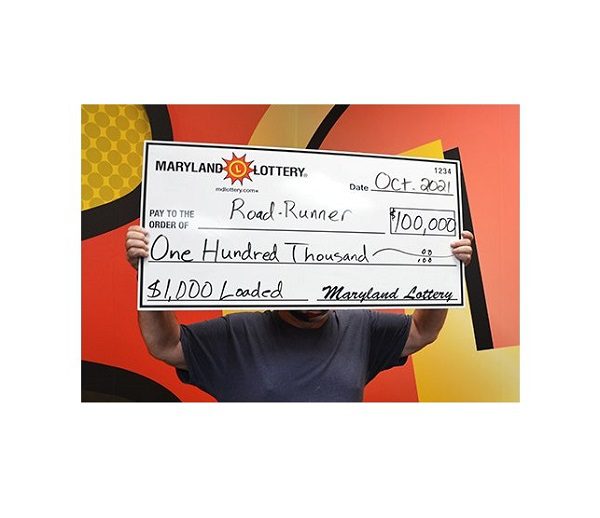 The anonymous Middle River man, who selected the winning nickname “Road-Runner,” won the hefty prize while scratching a $1,000 Loaded scratch-off.

The 69-year-old winner told Maryland Lottery officials that he purchased the scratch-off while visiting Wawa in Joppa. Over the years, he has put many miles behind him, first as a tractor-trailer driver and now, in retirement, driving for Uber. “Road-Runner” said the switch to gig work was just the thing to earn extra income doing what he loved during the day — driving — and spending nights home with his family.

His $100,000 top-prize win on the $1,000 Loaded game came after he found a $10 prize on one of the Maryland Lottery’s new Holiday scratch-offs. “Road-Runner” decided to use his small win to fund a chance to win something bigger. He eventually settled on the $10 $1,000 Loaded scratch-off.

The family man scratched his instant ticket while waiting in line for a cashier. He first revealed the winning numbers at the top of the instant ticket and then worked his way through the other numbers, looking for a match. “Road-Runner” revealed the number 21 and then the prize beneath it. When he saw the six-figure prize, the shocked player reacted by loudly repeating a quick phrase.

“I was saying ‘Holy, holy, holy,’ and a law enforcement officer who was standing next to me began to ask if I was okay. That’s when I asked him if he was seeing what I was seeing and showed him the ticket,” said “Road-Runner. “He said that he saw a $100,000 prize and then asked me if I needed security.”

The happy winner headed home early and phoned family members to surprise them with the news. He told Maryland Lottery officials that he plans to keep driving and use the prize to improve his home and update his ride-share vehicle.

Enjoying a bonus is the Wawa store located at 1419 South Mountain Road in Joppa. For selling a top-prize winning instant ticket of $100,000, the lucky Harford County store will receive a $1,000 bonus from the Maryland Lottery.