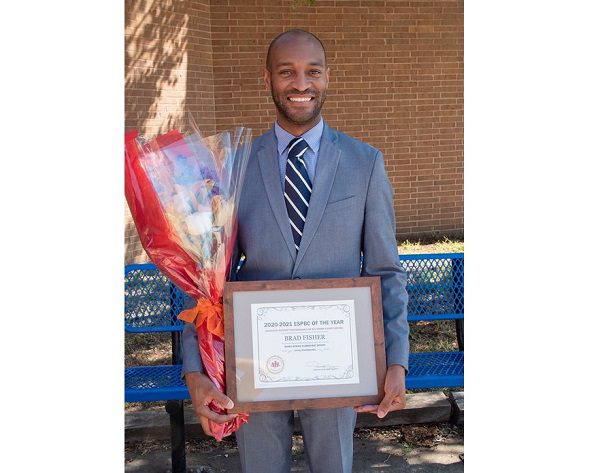 
ROSEDALE, MD—An administrative secretary at a school in Rosedale has been named the 2021-2022 Maryland State Education Association (MSEA) Education Support Professional of the Year.

“Congratulations to Brad Fisher on receiving this well-deserved honor,” said Baltimore County Public Schools Superintendent Dr. Darryl L. Williams. “In highlighting his excellence, we hope to bring attention to education support professionals throughout the school system. They play key roles in the operations of our schools and the lives of our students, and Mr. Fisher exemplifies the impact they can have.”

Fisher said he was “humbled by the honor.” In addition to thanking his school community, family, and friends, he thanked Jeannette Young, president of Education Support Professionals of Baltimore County (ESPBC), and Celeste Harris, director of Teachers Association of Baltimore County (TABCO) ESPBC UniServ, for nominating him for the statewide honor and for “their continued trust in seeking my input into policy.”

In accepting the statewide honor, Fisher said, “It is the ‘S’ in ESP that I’d like to speak about today. Without question, we do what we do in the best interests of children to support our students in gaining the knowledge and social emotional skills necessary to solve problems of the world that we haven’t yet. . . . All of you build those same important relationships because that’s what our students need, supplementing academics with culture to groom well-rounded human beings.”

Fisher joined BCPS in 2012. At Elmwood Elementary School, he served as an adult assistant, paraeducator, and office secretary. He moved into his current role as administrative secretary at Shady Spring Elementary in 2018. In May 2021, Fisher was named the 2021 BCPS Office Professional of the Year.

Back in May, Fisher was also named 2021 BCPS Office Professional of the Year.