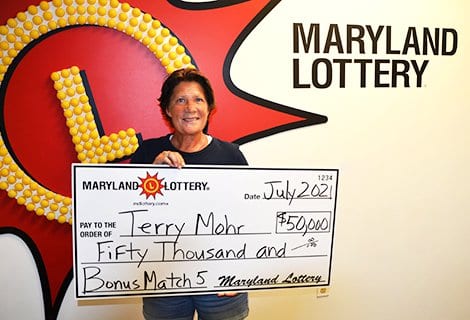 NOTTINGHAM, MD—A loyal Maryland Lottery player from Nottingham was pondering payment options for fencing in her yard for her new dog, which she named Poe. The solution came when Terry Mohr learned she won the $50,000 top prize in the July 6 Bonus Match 5 drawing.

“I didn’t even know! I asked the cashier to check my tickets, and she said, ‘Oh, you can’t cash that here!’” recalls Terry, who works in the construction business.

The Nottingham resident typically stops at Grape & Grain Wine & Spirits in Perry Hall on Mondays to pick up her tickets for the week. She spends about $20 on Bonus Match 5, Powerball, Multi-Match, Mega Millions, and 5 Card Cash tickets. On her most recent stop, the 56-year-old gave her tickets to the store clerk to scan and learned of her big win. Her reaction?

“I said a profanity!” Still, she kept the situation relatively low key, saying, “I didn’t want to draw attention.”

The pet lover recently adopted a rescued dog billed as being a Labrador Retriever mix. She has named past pets after artists. Her new four-legged friend is male, so Terry went with Edgar Allan Poe, Poe for short. Noting the link between the gothic writer whose grave is in Baltimore and the city’s NFL team, she noted, “I’m a huge Ravens fan.”


Winning the $50,000 made biting the bullet on the fence project easy. Terry also plans to help her mom with some expenses and booked a celebratory trip to the American Southwest to take in the sights and relax.

Also having reason to celebrate is Grape & Grain Wine & Spirits, which picks up a bonus of $500, equal to 1% of the prize. The lucky Lottery retailer is located at 4299 Ebenezer Road in Perry Hall.