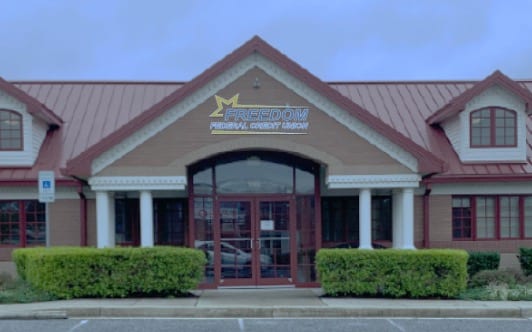 This is the Credit Union’s first branch in Baltimore County, and sixth branch within Northeastern Maryland. The new branch will be located at 5000 Honeygo Center Drive in the Honeygo Village Center, adjacent to Weis Markets, and across from AnyTime Fitness, and Liberatore’s Ristorante.

The branch will feature a full-service lobby, two drive-thru lanes, a 24/7 ATM, a free coin machine, and will provide ample parking and easy traffic flow and access. Financial Service Representatives will be in-person, and onsite, to support all business and individual banking needs.

The branch opening is the next step in Freedom’s expansion of their field of membership into Baltimore County, which the Credit Union announced in July 2020, following approval from the National Credit Union Administration (NCUA). Since then, Freedom membership has been open to businesses and any individuals who live, work, worship, volunteer, attend school, or have family in Baltimore County. Freedom now serves all of Harford and Baltimore Counties.

The expansion into Baltimore County was a logical step in the Credit Union’s evolution. Freedom was already serving over 3,000 members that are Baltimore County residents and were able to join because of some affiliation with Harford County.

“This is a great milestone in Freedom Federal Credit Union’s history, as well as a monumental opportunity for our members, and the residents of both Baltimore and Harford Counties,” stated Mike MacPherson, President and CEO of Freedom. “The Honeygo Branch provides us our first physical space within Baltimore County, and ensures that we can truly deliver the ‘Freedom Advantage,’ our unique credit union service offering, to the greater Baltimore County communities. Not only will we be able to better serve a larger group of Maryland residents and businesses who we feel are currently being underserved, but we can better enhance the progress and growth of our Credit Union, which will benefit all our members going forward.”

MacPherson continued: “I think it’s important to emphasize that Freedom has not only risen to the challenge of the day, but even in the worst of times, continues to move forward in our vision and mission. While much of this last year has been focused on helping members through the pandemic, we decided to proceed with our expansion into Baltimore County, which will further allow us to offer lower cost loan options, higher deposit rates, better technology and access, and more community support across both Harford and Baltimore Counties. Our focus has been on expanding and enhancing every avenue and technology to allow our members more access to conduct business wherever needed, in-person, or online, all in the name of creating a better member experience.”

The new site in the Honeygo Village Center, which formerly housed First National Bank, is currently undergoing renovations, and is expected to open to the public in late summer with a grand opening event to be announced at a later date.