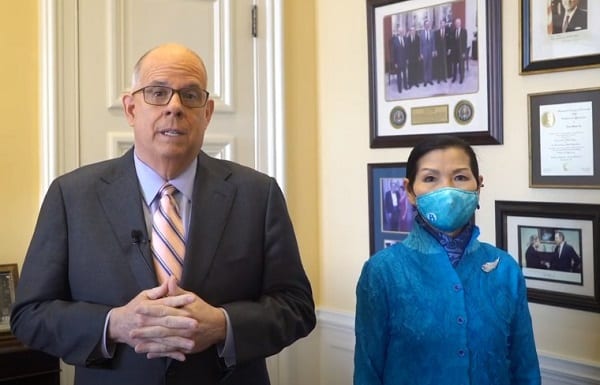 ANNAPOLIS, MD—Governor Larry Hogan on Monday issued a proclamation designating April 5 as Taekwondo Day in Maryland. Governor Hogan and First Lady Yumi Hogan issued a video message to highlight the continued effort of Taekwondo masters in the state to spread hope and positivity through the martial art throughout the COVID-19 pandemic.

“During the COVID-19 pandemic, Taekwondo has helped so many in our state stay ‘Maryland Strong,’” said Governor Hogan. “Despite unprecedented challenges, Taekwondo masters pioneered new ways to keep their martial art businesses alive, and set a powerful example for their students by demonstrating incredible resilience.”

Governor Hogan received an honorary ninth degree black belt from the World Taekwondo Headquarters in Korea during his trade mission to Asia in 2015 and first proclaimed Maryland Taekwondo Day in 2016.

Alongside First Lady Yumi Hogan, Governor Hogan has served as an honorary co-chair for the Maryland Governor’s Cup Taekwondo Championship since 2017, the proceeds of which support children battling cancer.