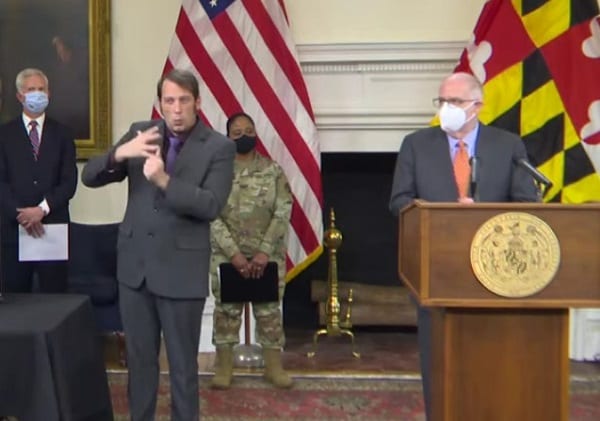 ANNAPOLIS, MD—Governor Larry Hogan on Thursday made several announcements related to the ongoing COVID-19 pandemic, including a testing program for schools, limited visitation for Maryland hospitals and nursing homes, the opening of the next mass vaccination site at M&T Bank Stadium, four-week vaccine allocation projections for Prince George’s County, and a new initiative to have counties appoint equity officers to address vaccine hesitancy.

In addition, the governor announced that he will visit the White House on Friday to meet with President Joe Biden.

Governor Hogan announced that the Maryland Department of Health and the Maryland State Department of Education have launched a program to provide up to 1 million COVID-19 tests for both public and non-public schools. This will serve as an additional tool to support schools that are open, or plan to reopen, for in-person learning for the remainder of the 2020-2021 school year. The state will provide both rapid antigen point-of-care and diagnostic testing supplies proportional to the number of students and staff returning for in-person learning, based on the anticipated number of students and staff that may need testing, using guidance from state health officials. This is a voluntary program, and schools will have the ability to opt in. Read more guidance from state health and education officials.

LIMITED VISITATION TO RESUME AT HOSPITALS AND NURSING HOMES

Governor Hogan announced that the Maryland Department of Health will issue orders to allow limited visitation to resume at Maryland hospitals and nursing homes. Each hospital will set its own visitation policies, which must be in compliance with CDC guidelines. Indoor visitation at nursing homes will resume as early as March 1, provided facilities do not have active cases and follow proper testing protocols.

Governor Hogan announced that he will visit the White House on Friday to meet with President Biden in the Oval Office.

STATE HITS NEW RECORD FOR DAILY RATE OF VACCINES ADMINISTERED, READY TO DO MORE THAN 50,000 SHOTS PER DAY

Maryland providers have now administered more than 785,000 total doses of COVID-19 vaccines, and 78% of first doses have been administered. The state’s seven-day average for daily doses administered has hit a new record high today of 26,179. The state has built the infrastructure to administer anywhere from 50,000 to 100,000 shots per day as higher allocations of vaccines become available.

Governor Hogan announced that locations for mass vaccination sites in Western Maryland, Southern Maryland, and on the Eastern Shore are being finalized. These additional sites will be ready to open in March, depending on when higher allocations of vaccines become available.

Governor Hogan has directed state health officials to provide county leaders with four-week projections for vaccine allotments for their local health department clinics. This goes above and beyond the two-week projections that the federal government is currently providing to states.

Governor Hogan announced that Brigadier General Janeen Birckhead, head of the Maryland Vaccine Equity Task Force, is asking each county to appoint an equity officer to serve as a liaison in order to closely coordinate on equity initiatives. In addition, General Birckhead and the task force, along with county equity officers, will be working with local organizations and clinical partners to stand up mobile clinics to reach critical populations.

Video from today’s press conference is available below.