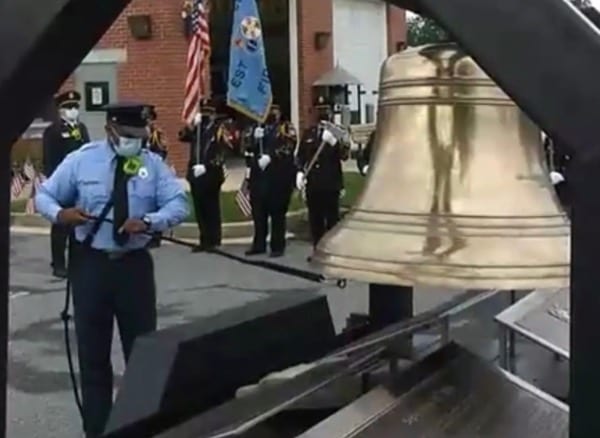 PARKVILLE, MD—A special ceremony was held in Parkville on Friday morning to remember the heroes of the September 11, 2001 terrorist attacks.

The annual 9/11 Remembrance Bell Ceremony was held at the Baltimore County Fire Department Station 10, located at the corner of Putty Hill Avenue and Old Harford Road.

The event honors the sacrifices of the 343 FDNY and 72 law enforcement officers who perished on 9/11.

Baltimore County firefighters and police officers tolled the bell on the Maryland 9/11 Rolling Memorial a total of 415 times, once for of the fallen heroes, beginning at 8:46 a.m.

A candlelight vigil will also be held at McAvoy’s at 7 p.m. on Friday evening. The vigil will remember the 2,977 lives lost on September 11th, including the 69 Marylanders who died.

The event will also honor the sacrifices made by the 162 Maryland soldiers who laid down their lives for their country in the war on terrorism.

Video from Friday morning’s event can be viewed below.