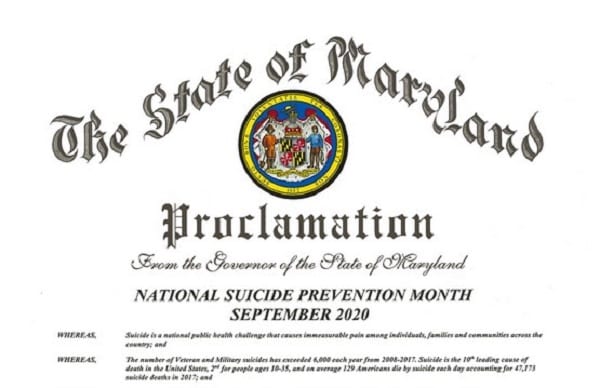 ANNAPOLIS, MD—Governor Larry Hogan on Thursday issued a proclamation recognizing September as National Suicide Prevention Month and highlighting the administration’s participation in the nationwide Governor’s Challenge to Prevent Suicide Among Service Members, Veterans, and their Families. Maryland joins 41 other states and one U.S. territory in issuing similar proclamations today.

“Each and every life taken by suicide is a devastating loss for our state, and this tragedy strikes far too often among Maryland’s community of military service members, veterans, and their family members,” said Governor Hogan. “If you or someone you know may be at risk, I urge you to speak up, reach out, and know that you are not alone.”

The State of Maryland is supporting the implementation of the President’s Roadmap to Empower Veterans and End a National Tragedy of Suicide (PREVENTS), which aims to strengthen and enhance veteran suicide prevention programs at the national, state, and local levels. Earlier this year, the Substance Abuse and Mental Health Service Administration (SAMHSA) and the United States Department of Veterans Affairs invited Maryland to participate in the Governor’s and Mayor’s Challenge to Prevent Suicide Among Service Members, Veterans, and their Families. These federal initiatives complement the objectives of Senate Bill 521, signed into law by Governor Hogan last year to create a comprehensive state action plan to prevent veteran suicide.


Over the past year, the Maryland Department of Health and the Maryland Department of Veterans Affairs have convened an interagency team comprised of more than 30 public, private, non-profit, and military leaders to develop an evidence-based plan to prevent suicide among members of the military community. The plan, which emphasizes screening, connectedness, lethal means safety, and peer-to-peer services, will be submitted to SAMHSA in the coming weeks. Partners include the U.S. Department of Veterans Affairs, the American Legion, the American Foundation for Suicide Prevention, the University of Maryland, the Maryland National Guard, Holy Cross Hospital, and five state agencies.

Learn more about the State of Maryland’s work to prevent veteran suicide here. Military service members, veterans, and family members who are in crisis or having thoughts of suicide—and those who know someone in crisis—can call the Veterans Crisis Line by dialing 1-800-273-8255 and pressing 1 for confidential support 24 hours a day, 7 days a week, and 365 days a year.

Crash closes northbound Route 7 at I-695