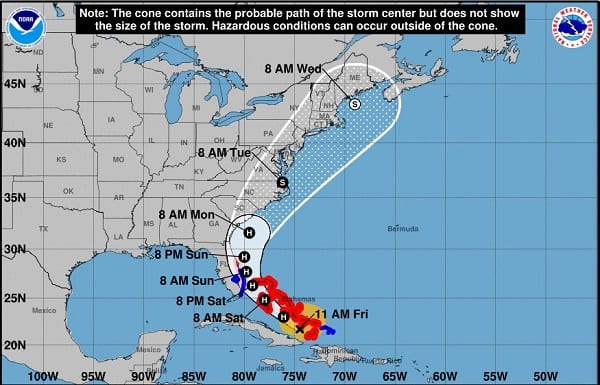 NOTTINGHAM, MD—Hurricane Isaias remains a threat to the Maryland area, according to the National Hurricane Center.

Isaias will produce heavy rains and potentially life-threatening flash flooding and mudslides across the Dominican Republic, northern Haiti, Turks and Caicos, and the Bahamas. Heavy rains associated with Isaias may begin to affect south and east-central Florida late Friday night, and the eastern Carolinas by early next week, potentially resulting in isolated flash and urban flooding, especially in low-lying and poorly drained areas. Isolated minor river flooding is possible in the Carolinas early next week.

Hurricane conditions and dangerous storm surge are expected in portions of the Bahamas on Friday and Saturday, and Hurricane Warnings are in effect. Preparations to protect life and property should be rushed to completion.

Tropical storm conditions are expected with hurricane conditions possible along portions of the Florida east coast beginning Saturday, and a Tropical Storm Warning and Hurricane Watch are in effect. Storm surge watches or warnings could be needed for part of this area this afternoon.

There is a risk of impacts from winds, heavy rainfall, and storm surge beginning late this weekend along the northeastern Florida coast and spreading northward along the remainder of the U.S. east coast through early next week.

Interests along the entire U.S. east coast should monitor the progress of Isaias and updates to the forecast.


The storm is expected to impact the Maryland area by Tuesday morning.