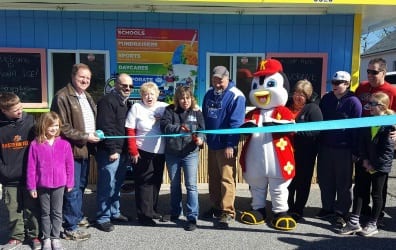 
CARNEY, MD—Baltimore County Councilman David Marks on Monday announced that an agreement had been reached to prevent commercial development at the corner of Joppa Road and Magledt Road in Carney and enhance the longtime snowball stand at that area, a local landmark.

Claude and Joni Elmore, owners of the Kona Ice snowball stand, have purchased the half-acre property at the intersection. The arrangement allows the snowball stand to make improvments, blocking commercial development such as a restaurant or convenience store, both of which have been rumored for that location over the years.

“We are thrilled with the support we have received over the past four years,” said Joni Elmore. “Our family is honored to be a part of the Carney community, and we look forward to improving this corner which is a gateway into historic Carney.”

Councilman Marks lauded the agreement, which will end years of debate about more intense development at the intersection.

”In 2012, I downzoned the parcel at Joppa and Magledt Roads,” Marks said. “This agreement is perfect for Carney, preserving a local landmark and improving one of its most notable intersections.”

There has been a snowball stand in this vicinity since 1948.

Claude & Joni Elmore have operated the Kona Ice stand at this location for four years.

They will be installing new landscaping and other improvements to beautify the intersection.