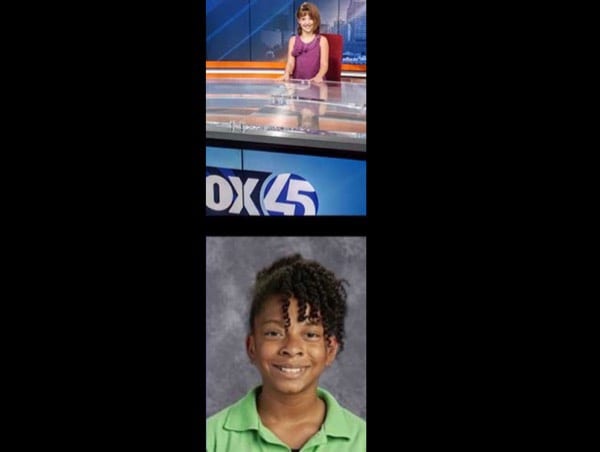 
JOPPA, MD—Bryce Garrett, a Grade 8 student at Sudbrook Magnet Middle School, and Alexis Orzolek, a Grade 4 student at Joppa View Elementary School, have been selected as two of the 12 Chick-fil-A Kid Correspondents for FOX45.

This is the third year that FOX45 has teamed with the 42 Baltimore-area Chick-fil-A restaurants to select Kid Correspondents. The educational competition was designed to reach youth interested in exploring careers in broadcast journalism.

From applications, semi-finalists are selected through a random drawing. One child from each of the 42 Baltimore-area Chick-fil-As is selected as a semi-finalist. The semi-finalists attend a luncheon at FOX45 studios, where they receive a tour of the studios, including a meet and greet with a FOX45 anchor and producer, and a bag of Chick-fil-A promotional items. Then, each semi-finalist presents a 30-second “report” in front of the camera and judges, explaining why he or she should be the next Chick-fil-A Kids Correspondent.

Garrett, Orzolek, and the other 10 winners will each receive 52 free chicken sandwiches and will each record a 15-second public service announcement that will be broadcast on FOX45 for one month in 2020. Scripts will be provided to the winners, and the recordings will take place at the end of December.

According to Sudbrook Magnet Middle school counselor Deborah Franklin, Garrett is a positive student who consistently puts forth her best effort in school. “She enjoys math, especially because of the challenge,” says Franklin. “Bryce plans to attend college to pursue a career in acting, but a career in engineering may be in her future, too. An athletic person, Bryce also likes playing football, soccer, and softball. She flourishes in all things that make her smile.”

As Orzolek, a FOX45 News fan, told the judges, she has set many goals for herself. She hopes to become a veterinarian, American Ninja Warrior, and the president of the United States. To prepare, she works with rescue bunnies at Joppa View Elementary, has earned a black belt in Tae Kwon Do, and studies presidents and other people who have had major impacts in the world.

Ando’s Market coming to The Avenue at White Marsh