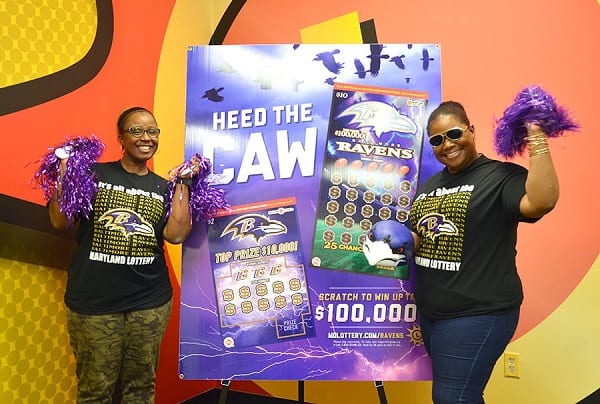 MIDDLE RIVER, MD—Two Maryland Lottery players have something extra to be thankful for this holiday season.

Donna Price from Middle River and Dawn Trusty from Baltimore will kick off Thanksgiving week by traveling to the West Coast with the Baltimore Ravens. They both won the “Travel with the Team to Los Angeles” prize through the Maryland Lottery’s Ravens second-chance promotion.

Donna and Dawn, along with one guest each, will travel with the team to see the Ravens take on the Los Angeles Rams on November 25 on Monday Night Football. The winners and their guests will travel on the team plane, stay in the team hotel, participate in a meet-and-greet with a Ravens player, and attend the much-anticipated game. In addition, each winner received $1,000 in spending money.


While Donna has previously traveled to other stadiums to see the Ravens play, this will be Dawn’s first trip to watch them out of town. Donna said she’s looking forward to flying on the team plane, while Dawn said she’s eagerly anticipating “the whole trip” and possibly putting her “feet in the Pacific Ocean.” Both fans are confident the Ravens will come home with a win.

This is the 11th year in a row the Maryland Lottery and the Baltimore Ravens have collaborated on Ravens scratch-off tickets and a second-chance promotion. This year’s two Ravens scratch-offs launched in late July. The $10 ticket still has seven unclaimed top prizes of $100,000, while the $2 ticket has six unclaimed $10,000 top prizes.