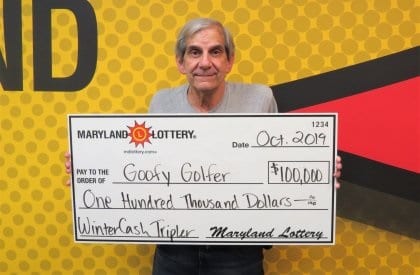 Posted on November 1, 2019 by Chris Montcalmo

This week, however, there was no “almost” about the $100,000 prize that “Goofy Golfer” found on a Winter Cash Tripler scratch-off. The near-miss episode he described added a humorous side to the story of winning the biggest Lottery prize of his life.

“I always scratch my tickets at night, after everyone has gone to bed,” the Rosedale man explained. “One night, a couple of years ago, I was sure that I had a $50,000 winner so I woke up my wife and daughter to show them.” It turns out, he continued, that the instant ticket was not a winner. He had read the rules incorrectly.

“They were pretty angry,” he said. “I’m still hearing about that night.”

On the day he found his lucky ticket, “Goofy Golfer visited Quality BP in Rosedale. He picked out the $10 Winter Cash Tripler scratch-off from the selection and took it home to play later. The married father waited until everyone in the house was asleep to scratch off his game.

Finally, certain that Maryland Lottery luck had really visited him this time, the “Goofy Golfer” awakened the household with confidence. “They were annoyed, thinking that it was the same as last time. The $100,000 helped ease their anger.”

The big win also benefits Quality BP. The retailer located at 7500 Pulaski Highway will receive a $1,000 bonus from the Lottery for selling the Baltimore County man’s lucky scratch-off.

“We’re going to pay off the house with this,” the winner said, happily. “It’ll be the first time in forever that we’ll not have a house payment to make every month.”