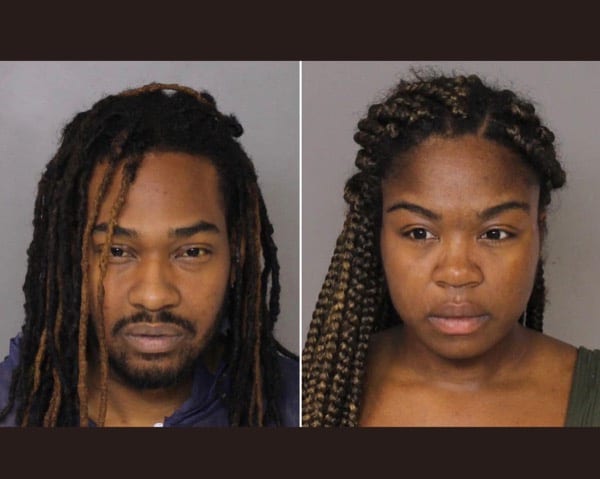 NOTTINGHAM, MD – Two suspects remain held without bail after robbing a business owner at gunpoint and attempting to extort an additional $30,000.

Information regarding the victims’ names and the exact locations of the crimes are being withheld by police in order to protect the victims in this case, however authorities confirmed to NottinghamMD that “at least some portion of this series of events did occur northeastern Baltimore County.”

Anthony Smith, 32, of Philadelphia, and Dana Jackson, 22, of no fixed address, have both been charged with armed robbery, robbery, and theft. Additionally, Smith has been charged with first- and second- degree assault, the use of a firearm in the commission of a crime, illegal possession of a handgun, and extortion. They both remain held on “no bond” status at the Baltimore County Detention Center pending trial.

Smith and Jackson were arrested during a traffic stop on July 16 after detectives watched Smith take a bait package left in a designated location following Smith’s demand of $30,000 from a local business owner.

Detectives recovered the bait package and a loaded handgun, along with additional evidence, during the execution of a search warrant on the suspect vehicle following the arrests.

The incident stemmed from an armed robbery at the victim’s home at an undisclosed location in Baltimore County in the early morning hours on July 14th.

As the victim was returning home at around 1:45 a.m., he was met at his door by Smith, who pointed a gun at him and ordered him inside. Smith demanded cash from the victim, then ransacked the home and stole valuables, including a wallet and credit cards.

During the incident, Smith was on the phone with a female who was later identified as Jackson. Jackson ordered Smith to obtain the PINs for the credit cards, but when the victim was unable to provide them, Smith repeatedly struck the victim in the face, causing serious facial injuries.

It is worth noting that NottinghamMD reported on a robbery matching this description of events that occurred in the Nottingham/White Marsh area earlier this month (click here).

Over the next several hours, members of the Baltimore County Police Department worked tirelessly in investigating the case, collecting evidence, and apprehending Smith and Jackson. Police say this collaborative effort among the officers and detectives led to their quick identification and arrest, ensuring the safety of the victim, his business partner, and the rest of the community.

“I’m really proud of the work that everyone involved put into this case. Their dedication and commitment to law enforcement and the people of Baltimore County is evident in the quality and swiftness of this investigation,” said Baltimore County Police Department Chief Melissa Hyatt. “It makes me proud to be a part of this organization.”