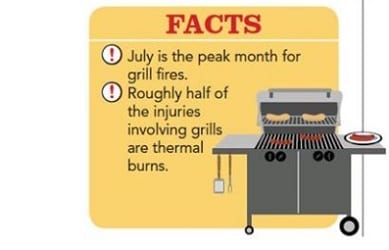 Seven out of every 10 adults in the U.S. have a grill or smoker, which translates to a lot of tasty meals – but it also means there’s an increased risk of home fires.

In 2013-2017, fire departments went to an annual average of 10,200 home fires involving grills, hibachis, or barbecues per year, including 4,500 structure fires and 5,700 outside or unclassified fires.

According to the NFPA:

See the graphic below, as well as the embedded video, for grilling safety tips for the Memorial Day weekend.  For more tips, visit https://www.nfpa.org/grilling.

Residents should also be aware of the recent ground beef recall (click here for details).